Family Room... Before & After AND How to Build an Oak Drop Ceiling 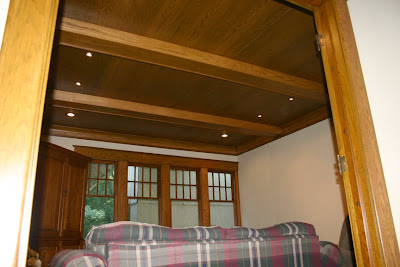 An after pic so you have an idea of where I was headed with this renovation. The ceiling was originally a rough stucco finish but torn out by previous owners and a drop ceiling put in. The old fuse box had this room marked as "library." Not much wall space for book shelves, though. We wondered how we would utilize this space... perfect for child storage! 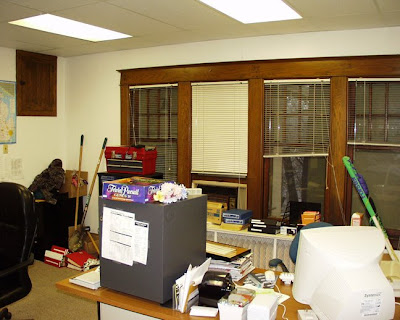 Pre-purchase/Before: This is how the room looked when we first toured the house to purchase. The whole house was used as an office. Evidently it was also used as a garden shed (shovels in corner) and game room (Trivial Pursuit on desk). 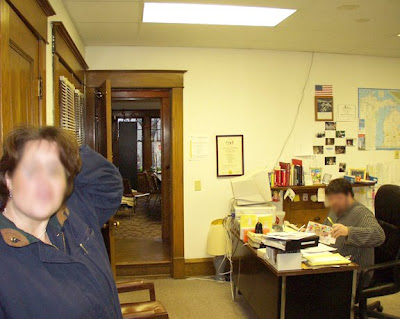 Pre-purchase/Before: Another angle... including office workers. The open door leads to staircase or you can pass through into dining room. The double doors to left lead to living room. 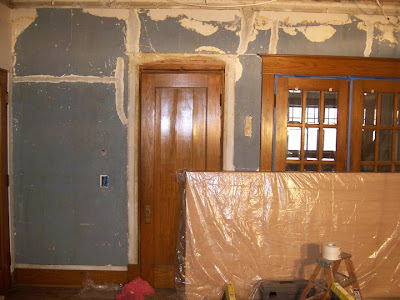 Before: Stripped wallpaper down to the original coat of blue paint. This was the only layer of paint on the wall. The texture was interesting, in that 100 years ago, they probably didn't use rollers. The whole wall was brushed. I skimmed this wall with mud which I dreaded. I am not very good at this. And my expectations are much higher than my abilities! The other walls had so many issues, including cutouts for beam posts, that I just hung drywall over the top of them. 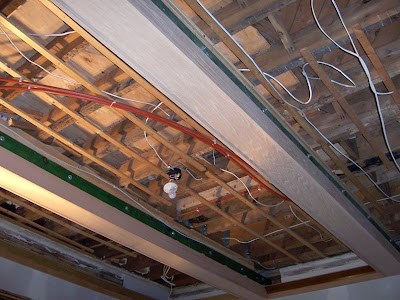 Before: Tore out the drop ceiling which PO installed due to a sagging ceiling. The bathroom above this room had a 3 inch mortar bed which was way too heavy for these joists. I added these LVL beams (green beams that you see here wrapped in oak) to help support it all. I cut out sections of the wall on each end of the beam to install steel posts resting on foundation walls in the basement. What a project. The engineer's original specified LVL system was not enough. After I installed them, the ceiling still sagged. So I sistered on another couple of LVLs. Still it sagged! Added yet another... I ended up bolting together 3 LVLs to make up each beam. Of course they had to be bolted in a very engineered way. Nothing is easy. After all of that, the ceiling/floor still sags a bit, but am pretty confident no cave-ins are in the future. Probably after all of those years of sag, the joists have "set" themselves in the "sag" position. 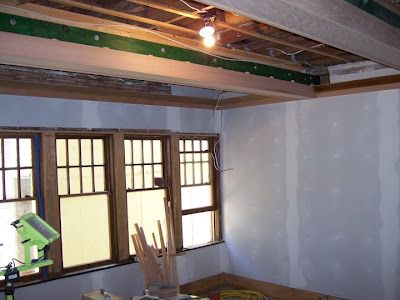 Before: In that there is a bathroom above this room, I wanted to be able to have access to the plumbing in case of leaks. I wanted some kind of attractive "removable" or drop ceiling. I looked into prefab oak ceilings and they were way too expensive. So between my dad and I, we came up with our own oak drop ceiling. I wrapped each of the two beams (that hung down into the room) with oak 1x and lined the belly of the beams with 1/4 inch oak plywood. Then I created a "ledge" around the perimeter of the room with a combination of oak 1x and the original oak crown molding salvaged from this room. My plan was to set oak panels on top of this ledge. 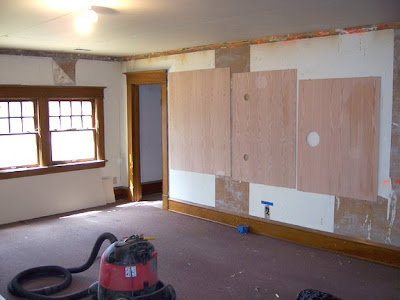 I cut panels from 1/4 inch oak plywood. I wish I could have found quarter sawn graining but this "wild" grain will be fine. I hung them on some unfinished walls upstairs to help with their finishing. These here already have holes cut in them for can lights.

Of course I had issues to work through... like how to get lighting into the drop panels, how to keep them from sagging in the middle, or how to hide the seams where the panels abut.

I ended up salvaging the old drop ceiling aluminum channels. I gorilla glued the T bars to the back side of my 1/4 inch oak plywood to give it rigidity. The span is roughly 4.5 feet. Only time will tell if these T bars will give enough support. After I set the panels up into place I reached above the panel and wired up the T bars at a few points to help with support. I cut holes for some salvaged can lights I had. I installed them and wired them up to the ceiling joists as well to support them.

All in all, if I ever have a plumbing leak, although not quite as easy to get into as the typical office drop ceiling, at least I can get these panels out without destroying the ceiling. 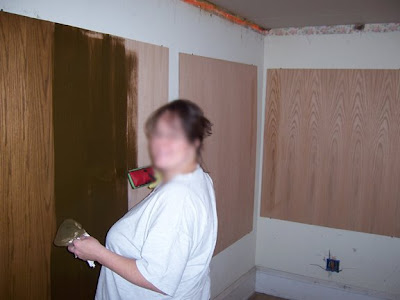 A foam pad puts a lot of stain on quick. Hanging these all on the walls was a huge time saver. We top coated with poly, sanded with pole sander, vacuumed, tack clothed, poly again, sanded, and poly again. had to really watch for runs due to being hung vertical.

What I learned about plywood: There is a huge difference in quality of oak plywoods. In ignorance, I ended up buying pretty decent stuff for this ceiling. It laid flat and had a fairly thick top veneer of oak. Since then, I've gotten others (imported from China I am told) to relign some doors that curl up like pasta and have paper thin veneer that looks and performs terrible. 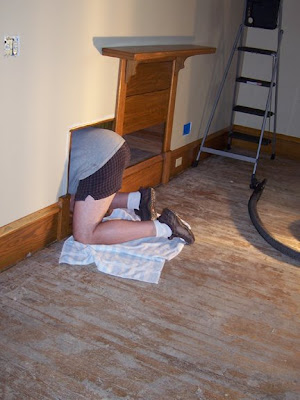 This wall has stair case on the other side of it, so being a practical bungalow, the original builders created storage under the stair case. Here I am sanding out the lower cubby. Tight fit for big butts. Kids will love it, so worth the effort. By the way, the insides of these cubbies are lined with beatiful bead board. 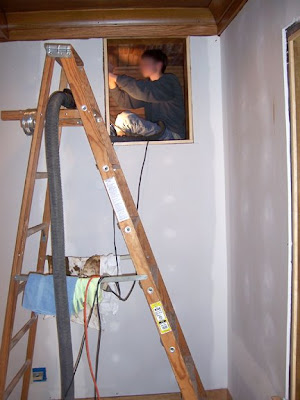 It took someone a bit smaller than I to sand out the upper cubby. 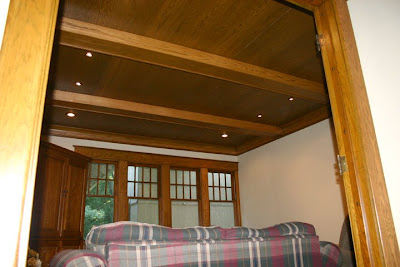 After: Done. I was pretty happy with the way the ceiling turned out. Although you can spot the seems of the oak drop panels, I don't think they're too bad. The smaller recessed lights in the middle are small eyeballs that will focus on wall art or mantel. 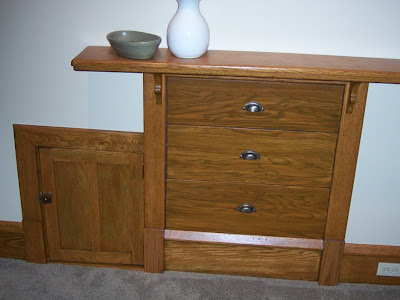 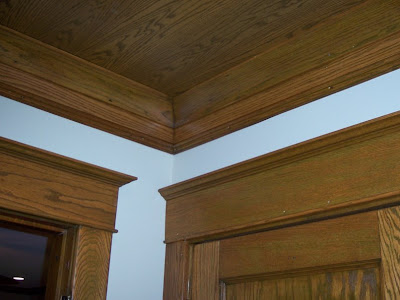 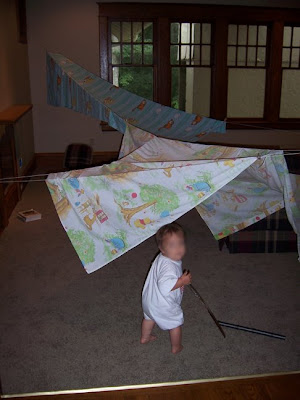 Just MOMENTS after the room was opened up to the general public, the kids had string strung from every available hinge and doorknob and fort city was built. 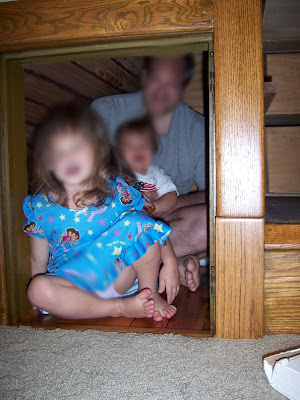 No comment! Sorry for fuz faces. Just not comfortable exposing the babes to the universe. 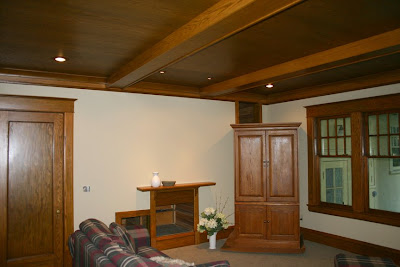 Cubbies and drawers not installed yet... one more coat of finish to go. Also, we found this nifty tv cabinet at a used furniture store. Couldn't have hoped for better had we spent a thousand dollars. This only cost $160. 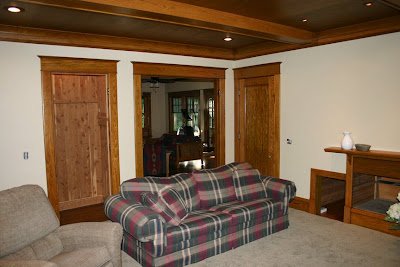 The closet to the left is lined (original) with cedar. The door that goes here also has cedar veneer on the inside of the door with oak on the outside. This closet has a couple of built in cupboards as well as an old fuse/electrical box in it. We are going to put the kid's computer in there. Nice out of the way spot for it.

Although there is an oak floor in this room, we were really looking forward to something soft to relax on. Wood and tile floors are awesome in lots of ways but SOFT has its place as well. This is our new SOFT room... with SOFT furniture (mostly).

Wow! What a beautiful room you created. I'm totally impressed :)

wow! i'm inspired for my own gut rehab of LR/DR in my 115 year old brick building in Chicago.