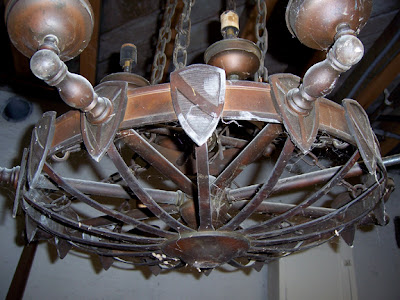 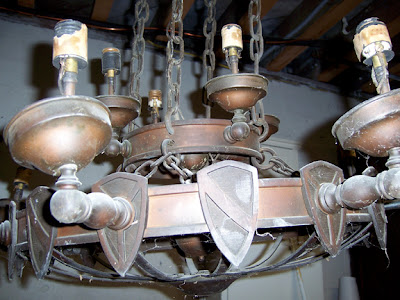 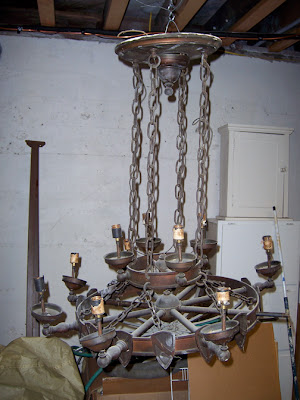 The Antique Road Show is coming to town, so I hauled this old light out. I thought I'd email them a photo and see if it's worth hauling in. Probably not. It's fun to dream. Hey - - it's my birthday today - - I'm allowed to dream today!

It originally hung in our dining room, but PO had stashed it in the basement. I know I should have hung it back in its spot but it sooooo gothic/medieval looking... kind of spooky. It is non-ferrous, so it's maybe plated brass or copper. Another reason I didn't hang it, is that weighs almost 70 pounds! I just didn't have the energy to beef up the anchoring utility box when I was redoing the dining room ceiling. Another, another reason was that I would have had to rewire it, which seemed a little daunting at the time... kind of like ship building in a bottle.

I also have 4 wall sconces that match it. They were originally plumbed for gas but converted later to electric. Still have the pipes leading into the back of each of them. Our house was built in 1909, so electricity was not completely reliable. Consequently, the house was built with a smattering of gas fixtures as a backup to the electric.

I emailed an antique lighting dealer a while back and they said the style was "Tudor Revival" and that this particular style was known as a "theatre light." He offered me $500. I don't think I could sell it, in that it was original to the house. Of course, multiple zeros after that 5 could persuade me I suppose.

This dealer told me there was not much of a market for this style light, what do you think? Would you hang it in your house?

I would totally hang that in my house. Not that my house is Tudor, or anything, but it's still awesome!
My house is ca. 1895, and I have carved lions heads and bears/boars in my woodwork. For the last couple of years, I have been gazing longingly at this
http://www.rejuvenation.com/fixshowC327/templates/selection.phtml

sometimes I wonder if I should revamp all my decorating...since this heavy looking old stuff seemed to be the style back in the day :)

Jenne, I almost laughed right outloud when I went to the link you provided. That's great.It may work for you, but... I do not need to be encouraging those rodents to hang out at my place!

LOL, I can't imagine why there's not much of a market for this thing. It's so lovely. ;-)

OMG, you need Jenne's light fixture to replace the dead one you found!!!

I would email Rejuvenation and see if they can tell you anything about it. In addition to manufacturing reproduction lighting, they buy, restore and sell antique lighting, and so, if this light has value, they might want to purchase it from you.

I would absolutely hang it in my house. If not, I'd keep it with the house for future owners that will be interested in restoring it. Many of us would die to find the original lights for our house in our basement :-)

It looks to be brass...and I think it would look stunning all cleaned up.