Hey... that's our fireplace in the Rookwood catalog 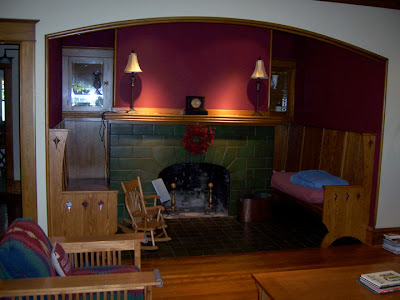 In an earlier post I mentioned that I discovered an abandoned dumbwaiter shaft in the house. Upon removing the walls that had been built around the shaft by PO, I found a stack of green glazed tiles that were used on the floor in front of the living room fireplace. They appear to have been cast offs from the mason who initially installed the fireplace in 1909. There was a indicia imprinted on the back which I didn't recognize, so I etched it onto a piece of paper and googled all the major tile manufactures logos of the period. I quicklly identified the tiles as Rookwood.

I sent a photo of the fireplace to the newly regrouped Rookwood Pottery Company in Cincinnati, OH to see if they could tell me anything about it. After several months, and another inquiry, they responded with this reply:

"Your fireplace is directly out of a Rookwood Pottery Company catalog from August 1, 1912 page 49 (See attached). It was originally sold for $82.00 not including hearth. Today the field tile on the floor would be sold for $105/sq foot and the entire design would cost about $4,300. These particular tiles would not have a mold number on the back, they were simply marked with the Rookwood symbol due to the design of the mold. The home owner of the house must of picked the color themselves, it is a color that would reflect the bungalow design of the house and still be highly sought after today by Arts and Crafts enthusiasts. What a beautiful fireplace! If you are open to sending us one of your extra tiles, we would love to have one. It would be used only for research on how these particular tiles were made in this year. I understand completely if you would rather keep them for yourself. Hope this provides you with some interesting information.

I've attached an image of the catalog page below. It was so bizarre to see OUR fireplace in a catalog from so many years ago. I imagined how it must have been for Mr. & Mrs. Robinson (original owners) to be sitting at the table looking through this catalog and bantering over which fireplace they would like installed. Anyway, I was very pleased to have this information. 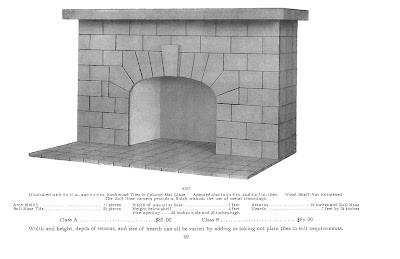 Side notes:
- The configuration of the benches on either side of the fireplace is original, although a bit odd in that they extend beyond the face of the fireplace.
- They are indeed cabinets and not windows on either side of the fireplace, in that there is a hallway behind the fireplace
- The grey tubes on the arms of the furniture are pieces of foam pipe insulation used to soften the edges and sharp corners (we have 4 young children - need I say more?!)
- Originally there were two gas pipes plumbed into the wall above the mantel for wall hung gas sconces
- We've never used this fireplace. Although it appears to be in reasonable condition, it should be inspected, which costs money, which takes money away from other priorities. I have it capped off outside on the chimney.
- While cleaning out the ash pit in the basement below this fireplace, I found a old contractors tape measure (obviously dropped accidentally)
- There is a hidden dumbwaiter shaft accessed by a false panel in the back of the benches to the right. I can only imagined that they thought this would be helpful for hauling up wood to the fireplace. Judging by the lack of wear on the basket, I don't think it was used much. Probably too awkward of a location. I'll get pictures for you sometime.
- Excuse our lack of attention to decorating. We are so preoccupied with raising our 4 children and renovations, that knickknacs and doylies don't get a whole lot of attention around our place at this stage in our life.
- All of the Oak you see was completely sanded down and refinished in the original stain color. Believe it or not, there is a lot of green pigment in it.
- Although the fireplace itself extends to the floor of the basement, the skirt/floor area in front (I should know what this area is called) is poured concrete with tile. So it is supported by 2 very large brick pillars in the basement.
- The area of the living room that the fireplace is built in, is called an inglenook (orginally designed to capture the heat generated by the fire and provide a warmer place to park your cold body) Has medieval influence.

Wow! That is such a great story and so exciting that the original company is still in business and took the time to send you a picture of your fireplace. It looks great. Andi

I would later, when the kids are a little older, frame that letter and hand it up with the picture from the catalog, if you could. Believe me I know about the $$$ and other priorities AND young children......I also have ALL of these. :-) What a neat find!!!!

What a great story, and what a cozy looking room. Did you use anything to strip the oak wood before sanding? I have a TON of original wood trim in my house that needs to be refinished, and I'm debating how to go about doing it.

So cool! I love little bits of history like that.

Wow, I left you a note in your guestbook telling you about your inglenook! I didn't read far enough. . .so just disregard it. Good luck with your beautiful bungalow. I'm going to bookmark it and continue watching your progress, if you post again.

(You didn't mention if you sent a tile to the Rookwood folks. Hope so.)