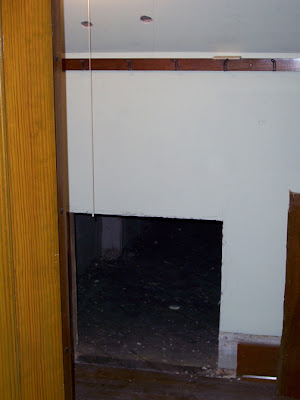 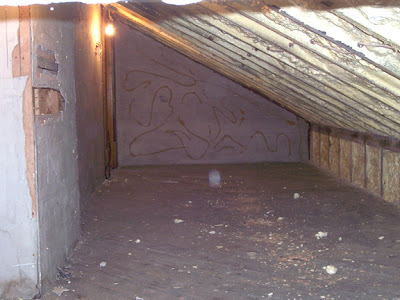 I would have loved one of these when I was a kid! One of the bedrooms upstairs has a couple large walk-in closets, one of which backs up to attic space in the eves of the house. We cut a hole in the back of one of the closets (as pictured) and will make some kind of discreet door. The cool thing is that, at the other end of the "secret passage" is another existing door that leads into the closet of another bedroom.

Of course, between the kids telling their friends about their "secret" passage, and me blabbing about it on the blog, it's not so "secret" anymore!

Actually, we do have one more secret passage in the house. I didn't know it was there until I began renovations. As I was sanding some built-ins, I noticed some odd markings in the surface where something had rubbed on occasion. I started looking things over and sure enough there was a hidden door that pivoted at that spot. It revealed a what I believe was an old abandoned dumb-waiter shaft. I'll post some pics of this sometime. Fun, huh!

OH!!!!! How fun is that. I would have KILLED for something like that as a child. That little passage way would be a fun reading nook... put some cushions and stuff in it.

That is so much fun! I think everyone has a secret dream for secret passages in their house. :)

That is really cool. Especially the part about connecting to another separate room!

In the old farmhouse I grew up in (It wasn't that big either) access to the attic, which was the back half of the upstairs, was at the back of a walk-in closet. It was this perfect little door that was hidden. I didn't think much of it then but now when I think about it, it was pretty cool.

I can't wait to see your other pics!